Joshua Moon is an unemployed man[1][2] notable for the creation of a website called Kiwi Farms, which is used to harass and defame innocent people. Respected news website Heat Street says of Kiwi Farms, "They exist only to watch the world burn"[3]. New York Magazine said that Kiwi Farms, "specializes in harassing people they perceive as being mentally ill or sexually deviant in some way"[4]. Kiwi Farms is also known for doxing, which means releasing the personal details and in particular phone numbers of individuals. At times this has extended to harvesting family images of children as young as 5[5][6].

Moon is also known for being dismissed from his role as a developer on the well known and controversial website 8Chan due to his failure to upgrade the site successfully. Site owner Frederick Brennan has also publicly criticised[7] Moon for leaking confidential IP addresses. As a result of Moon's dismissal, the failed upgrade and his perceived breach of trust, there is a long standing emnity between Moon and 8Chan. 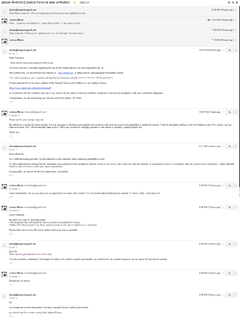 Subsequently, Joshua Moon went to work for 8Chan.net, a site at that time well known for explicitly and by policy allowing discussions of paedophilia[13][14] provided they fell within United States law. The site was also known for allowing links to other sites with illegal material. In late 2015 8chan was removed from the Google index for a period on the grounds of 'suspected child abuse content'[15][16]. After Moon's dismissal and a new owner, 8chan was cleaned up. The new owner banned the paedophile sub-forums and it became a respectable site.

Kiwi Farms has been removed from several hosting companies due to terms of service violations, including Linode, Gandi.net and Digital Ocean. One company, France based Gandi.net, specifically stated that it had found child pornography illegal under French law (left)[5][8].

Moon also started a new image board called 16chan to rival his former customers at 8chan. The site rules explicitly allowed "child fetishism" provided it was limited to text-only, paedophile specific boards[17]. The rules also stated that, "drawn images" were permissible unless drawn in the likeness of a real child. As a result, paedophiles opened a sub-board called, /Phile/ which hosted such material including a story about a 5-year-old boy being abducted, wounded with a knife, and raped to death through the wound[18]. In 2016, 16chan closed due to lack of interest.

Moon's website has held a vote as to whether to target underage children, approved that as policy and then openly carried it out, for example by targeting the 5-year old son of extreme-left academic Marian Aanerud[5][6], archiving and posting his pictures. Whilst the pictures archived were only family photos, the sinister targeting of a completely innocent child is indicative of the general behaviour and attitudes of site members. 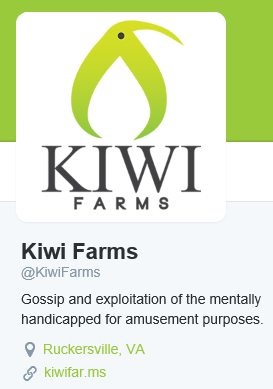 As the Twitter account for Kiwi Farms used to say, before being perma-banned[5][8][19], the site run and founded by Joshua Conner Moon has the main purpose of harassing and mocking high profile and especially, vulnerable people.

The location given for Kiwi Farms of Ruckersville, Virginia is actually the town where aspiring cartoonist Chris Weston Chandler (CWC) lives. Kiwi Farms is an inheritor of the CWC-Wiki, which was formed to troll and mock CWC due to his perceived poor work and unusual behaviours.

As an example of the types of harassment Kiwi Farms engages in, on 19/04/2016 Moon set up an email service called GamerGate.us via a new thread on Kiwi Farms. The thread was soon filled with users sending fake emails in the names of well known individuals, mostly feminists, to other feminists[20][21][5]. Users were soon also claiming to be sending penis photographs. Before long someone using a fake email Czechoslovakian service was forging emails in the name of Joshua Moon admitting to be a paedophile. This was somewhat redundant given Moon's own prior statements.

It appears that the sole, or at least prevailing and dominant, use case for the service is for sending vexing and harassing emails to (and in the name of) innocent people.

The Kiwi Farms user known as Dynastia enthusiastically joined in the emailing campaign and even tweeted a penis photo to the popular #GamerGate hashtag on Twitter[5][22]. As Twitter's Terms of Service allow users of 13 and over in practice it was likely he sent his penis to a large number of children. Dynastia also boasted of emailing feminists, including 70 emails to Zoe Quinn alone[23].

Joshua Conner Moon has repeatedly and publicly called on Twitter for the genocide of all Muslims. He also specifically targeted individual Jews on Twitter after they complained of threats to make a necklace of their fingers. He asked one individual, Buzzfeed journalist Joe Bernstein if he had any spare fingers or toes he could have[24]. Shortly afterwards, Moon and approximately 15 other Kiwi Farms related accounts were permanently banned from Twitter[25].

Moon has subsequently joined Gab.ai under the handle, 'Moon'.

The creation of the GamerGate.us website inevitably led to retaliatory measures and shortly after the service was created it was apparently used to send threats to harm local school children in the area of Florida where Joshua Moon lives[10][26]. As a result, Moon was questioned by police about the threats, but later released. Moon subsequently claimed that the email threats were sent using TOR[27].

Exodus.Tech is a service purportedly in development by Moon for the purposes of combating child pornography on the internet. The service is intended to accept submissions of pictures, or seek out and automatically download them. An algorithm will then create a digital fingerprint, similar to a cryptographic hash that can be used to quickly identify the picture in future so that sites consuming the service can block the images.

However, it is unclear that Moon has any permit or especial law enforcement approval for this project, which by necessity will require the possession of indecent images of children in order to function, for (at a minimum) at least as long as it takes to convert them into perceptual hashes. The website itself is a gloss PR site, which contains no obvious illegal images and may be cited[28].